Camera are currently recording a new EP, to be released in November. To support the record, the band have announced a number of gigs with support from two other Drum With Our Hands acts: Sparrowhawks and Baby Brave.

Sparrowhawks, have garnered much attention from BBC Radio Wales amongst others for their pristine harmonies and beautifully crafted songwriting. Their debut EP on Drum With Our Hands is currently being recorded and will be out in the new year.

Baby Brave have released one limited edition EP on Drum With Our Hands, which gathered much acclaim and quickly sold out. Since then the band have changed line-up and redefined their sound. This tour will see them playing their new songs for the first time before heading into the studio in December.

From Radiohead and Elbow, to Wilco and Woody Guthrie, Camera take influences from all genres of music and carve out a sound that is as powerful and epic as it is intimate and heartfelt. Teaming the classic, guitar driven indie rock of Camera with the lo-fi pop of Baby Brave and the soaring folk harmonies of Sparrowhawks these three bands will complement each other perfectly and these shows are set to be something very special indeed. 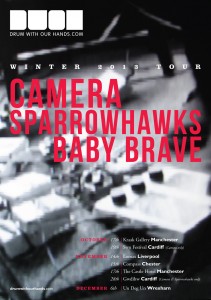 To whet your appetite hit the following links:

Drum With Our Hands bandcamp