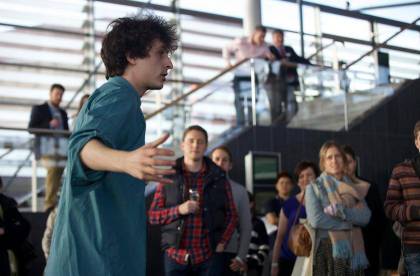 After  kicking off 2016 in style, we’re bringing the very best of Welsh Spoken Word with:

Our (in)famous open mic kicks off at 7pm with a host of the best Spoken Word, Musicians, Comedians and more!

Zaru Jonson has been performing words regularly since being awarded the second place and audience vote prizes at Literature Wales’ John Tripp Award for Spoken Poetry, 2009. Under various names, he has since read at the Edinburgh Free Fringe, Dinefwr Literature Festival, Cheltenham Poetry Festival, and two or three hundred-odd other open mics, exhibition openings, protests, hip-hop nights and miscellaneous events, often clustered around Cardiff. During 2014, he took part in the ‘Dylan Live / Dylan ar Daith’ tour in celebration of Dylan Thomas’ centenary, playing at eight universities around Wales, the Dylan In Fitzrovia Festival in London, and the PEN International Literature Festival in New York City (alongside Mr Phormula, Martin Daws and Professor Daniel Williams.)

Zaru likes dogs, believes in a god, and is incurably sincere. Recently he returned from Canada, where he avoided everything and picked hazelnuts.