On graduating with a BA in Illustration from Glyndwr University, Wales, Stedhead returned home to the Isle of Man to develop her artistic practice. In September 2014, following a series of collaborations, Stedhead moved to London to further develop her career. Exhibiting at the ICA with DJ and artist Goldie and alongside Jamie Reid and Mau Mau at Eddie Locks The Lock Up exhibition, Stedhead soon found herself engaging with an East End all-female art collective; together with Suzko, Candy Lo and Motor she has scaled and painted large artworks for various events both in and out London. From group shows at Juno in Shoreditch to Notting Hill’s Portobello Film Festival, the D&AD awards at the Truman Brewery, a skatepark in Luxembourg, Street Fest and UpFest in Bristol, and exhibiting with an all Manx (IoM) collective called Dark Seas Wild Mountain on the Isle of Man, Stedhead has been live and kicking with these collectives.

Her latest show ‘Beauty Marks’, held at Montys on Brick lane at the end of 2015 was her first independent London exhibit. Her latest experiments conjured up bodies from calligraphy like swipes of a fat, chisel tipped permanent marker. All artworks were drawn under her own steam—which is to say, drawn from her own liveliness, celebrating the movement of bodies through bold strokes of marker. Inspired by motion, music and the beauty in our contours. Her unique style dictating the jutting of limbs, jaws and hips as silhouettes, marks and lines, achieve character born of the artists intuition. These spirits enhanced by brilliant flashes of azure, and gold threading through the scene, demonstrating the energy of the human form.

For Focus Wales, Stedhead will be including her Beauty Marks Exhibition, as well as some brand new pieces. 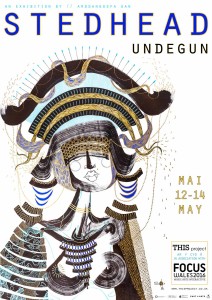