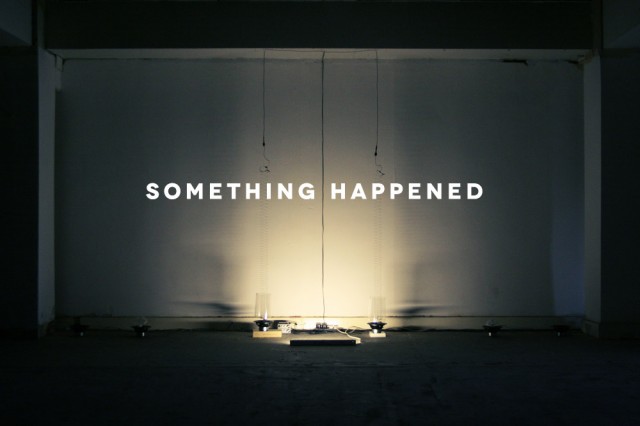 The third and final Oriel Wrecsam offsite exhibition in the current season is about to open at Undegun. The series of exhibitions, presented in a vast dark space previously used as a store room in the former sports store, has included Stefan Gant’s exploration of Tug of War, and Ronan Devlin’s interactive projection. The latest exhibition, which opens this week, is Simon Proffitt: Something Happened. Steffan Jones-Hughes, Arts Manager Wrexham County Borough Council, has curated the programme, which explores notions of Wrexham and the previous use of the space.


“The exhibitions have looked at ideas relating to Wrexham’s position as a border town, but also each artist has responded to the space in their own way. Simon’s exhibition looks at references to sport, music, playfulness as well as referring to the previous exhibitions in the series. He has transformed the space into a galaxy of playfulness and contemplation. There are ping pong balls, mirror balls and a zither!”


Something Happened is the latest manifestation of Simon’s long-term interests in using familiar objects to both create and attempt to control chaotic systems, and taking things out of their usual habitat and putting them where they don’t belong.


Despite using very simple starting conditions with few components, and despite operating within a predictable framework, it is fundamentally impossible to predict exactly what will happen next in each of the pieces within the work at any given time. References are made to sporting rivalries, ancient Japanese court music, planetary systems and discotheques.


The main feature of the exhibition recalls the space’s former use as a sports shop retail warehouse, re-imagining it as the ultimate party venue.


Simon Proffitt [b. 1975, Nottinghamshire] is a multi-disciplinary artist pursuing a range of seemingly unrelated threads in a range of media, some of which arise from observation and response, others of which don’t. He has been based in north Wales since 2007.


After a short career in research science / technology based R&D, during which he investigated the chemical physics of artificial diamond surfaces and worked towards developing what was to become the Blu-ray disc format, he became a self-taught graphic designer. Working more creatively and freely allowed him to more fully develop his ongoing interest in audio and visual art. Although different in application, the three areas of science, design and art are ultimately three different approaches to problem-solving, and have much in common.


Oriel Wrecsam will present a conversation with the artist on Thursday 2nd October @ 11 am. For more details please contact Oriel Wrecsam – Oriel.Wrecsam@wrexham.gov.uk / 01978292093