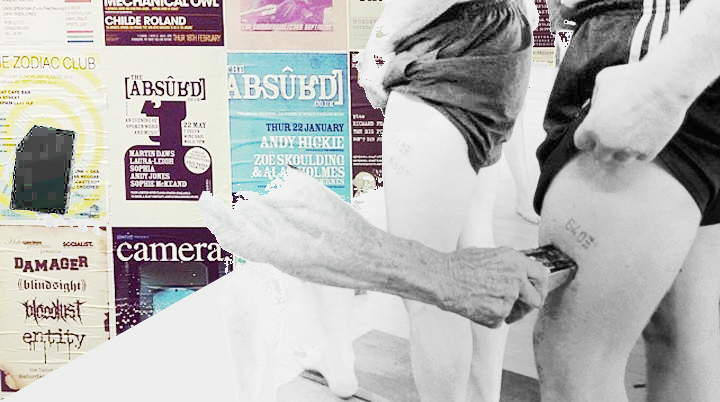 This Friday at Undegun is a big one. Stefan Gant will be delivering a talk about his work and THIS Project and Spectrum Promotions collaborate and host an evening of guest speakers and live music celebrating Wrexham’s musical heritage.


Stefan Gant will discuss his works & ideas surrounding drawing practice through 2D, 3D and 4D processes. The Tug of War Drawing Project is an Oriel Wrecsam Off-site presentation supported by the Arts Council of Wales showing on the top floor of Undegun and Stefan is the first artist to exhibit work in this space. This event is the perfect opportunity to see this exciting work and meet the artist. The event is free and all are welcome, wine and soft drinks will be provided. 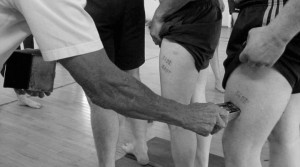 Tir Tynnu Rhaff (Tug of War Land) is a 28ft x 3ft cast in graphite and resin of the ground in Llanybidder following a National Welsh Tug of War contest. The ground, containing the remnants of heel marks, ridges and hummocks narrates the Tug of War events generated through a one day culmination of competitive activity from teams across Wales. Derived from a plaster mould taken from the location, the resulting cast realised over an eight month period is both monumental and pays homage to the event, elevated on steel pins. The foot marks embedded in the cast act as a story telling device, revealing the struggles and episodes of the days events made by teams across Wales. The cast depicts strong geological connotation whilst equally a remnant of the raw human event. The traces left by the actions when reviewed closely expand enquiry through the topography of the welsh landscape made by its communities in new visual formats.


Lloegr y.e. Cymru (England vs. Wales) Video Documentary (Slow Motion) is a multi-camera video production portraying England (Oxney Vines Cross TOW Club) against Wales (Clwb Tynnu Rhaff Llanboidy, Sir Gâr) in a National Tug of War Competition. The slow motion portrayal depicts temporal ideas concerning the past, fragmentation, tension and deep cultural rivalry. Importantly, the piece plays with the link and connectivity between these two ancient cultural adversaries and essentially the psychology of human nature. The identity of the winner is cut short, alluding to a continued questioning. The piece formed part of a year-long project travelling with Welsh teams and communities, recording and exploring the relationship between expanded notions of drawing and the activity of the tug of war contest. This video was a highlight of the project, creating new visual manifestations. The video is considered a drawing, portraying notions of line, tension, boundaries, territories, gesture, physicality and performance, re-suggesting what drawing can be. The low pitch sounds carry deep-rooted notions of masculinity in its rawest form generated through the slowing process. The sound accentuates ideas of weight and force, though also embraces agricultural sounds, inherent to many of the rural participants.


Pwyso (Weigh-In) Duration 6mins (Silent) The video installation depicts the initial ritual stage of weighing-in prior to a Tug of War contest. Teams are collectively weighed into associated weight classes and finally ‘stamped’ or ‘branded’ through an approval stamp. The video documents the context of this act whilst the process of undressing and shedding clothing presents strong, evocative and almost sacrificial elements to this ritual sport. The video is monochromatic, silent and is soley engaged in visual observation, analysis and re-presentation. Notions of drawing are expanded though the mark given by the official and leg of the receiver. 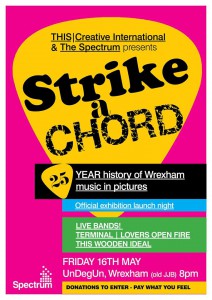 Strike A Chord is a retrospective exhibition exploring 25 years of Wrexham music in pictures. To coincide with the stunning Focus Wales festival this year THIS Project, together with Spectrum Promotions and aided with the help of many people involved with the music scene over the years, devised this exhibition and we are currently displaying a number of posters documenting 25 years of music in Wrexham Music. We would like to extend and expand the exhibition and are currently accepting submissions – if you have any posters, tshirts, records, ticket stubs or film and photography or anything else relevant to the history of Wrexham music we’ll add it to the exhibit – contact mike@thisproject.co.uk (we’ll return it to you after, of course).


As ever, if we have missed something or there is something coming up you think we should know about, get in touch! Please email contact@thisproject.co.uk or find us on facebook or twitter