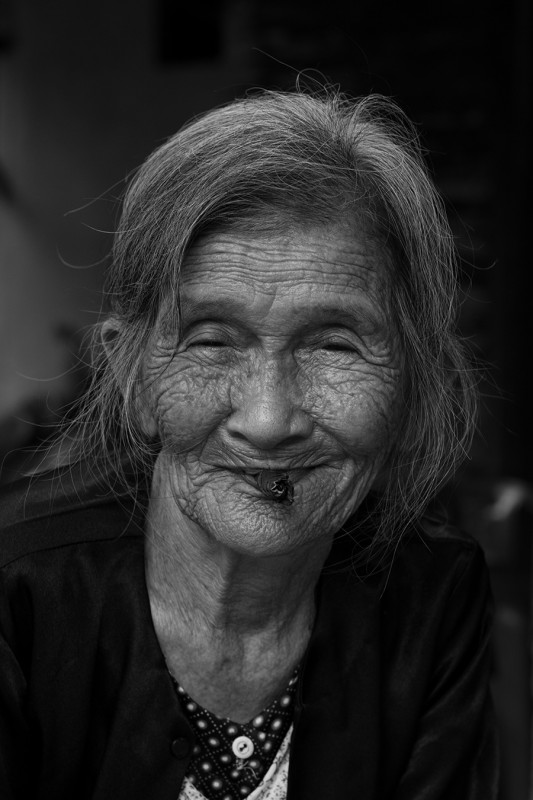 busy street of Hue we departed for our tour around the

demilitarized zone which my friend Craig had been longing for.

excessive 7am, alcohol fuelled rampage out.

bombed during the war and was, well deserted, just a gift shop

with some dusty cans of Pepsi and no attendant. We wondered

around the vast open space and walked over to the various

wrecked tanks and planes dotted around. Then in the distance a

man was running over carrying a strapped box around his waist

the sign of a sales man. After following us around trying to

prices he finally left and so did we.

walked us over to a small shop were we sat and had some coffee.

made sieve, sieving though various herb looking plants whilst

smoking in Vietnam. I walked over to her and smiled, pulled

up my camera, did the universal hand gesture of tapping at

the camera and then at her, she nodded with a greeting smile.

I took a quick shot, looked back at her and under stood the

universal rubbing of thumb and forefinger and handed her a 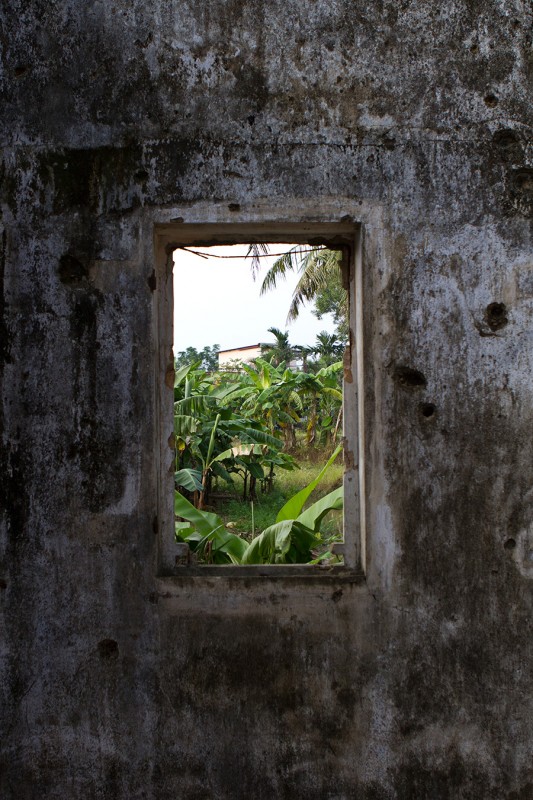 church that had been used as a last stand. The Church was bullet

ridden and on its last legs. 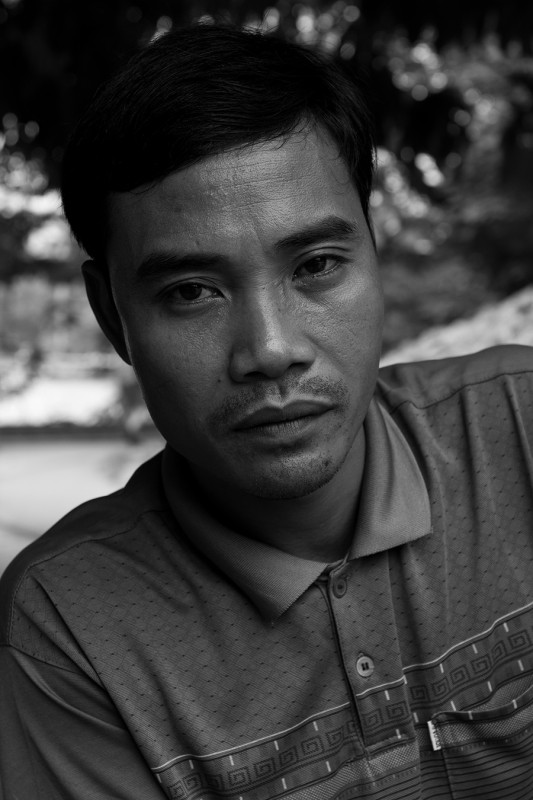 Sat outside Ngoc Son Temple bridge having a quick break

random odd bits. I say rolled as we was in one of these strange

wheel chairs where the steering wheel also provides the

momentum to drive the cart forward by rocking it back and

forward. This was now 9 weeks into the trip and money was

becoming a concern so I couldn’t afford to dish out 60,000 dong

for 2000 dong in a shop. I had also been stashing away

10,000 dong notes as payments for photos so offered him the 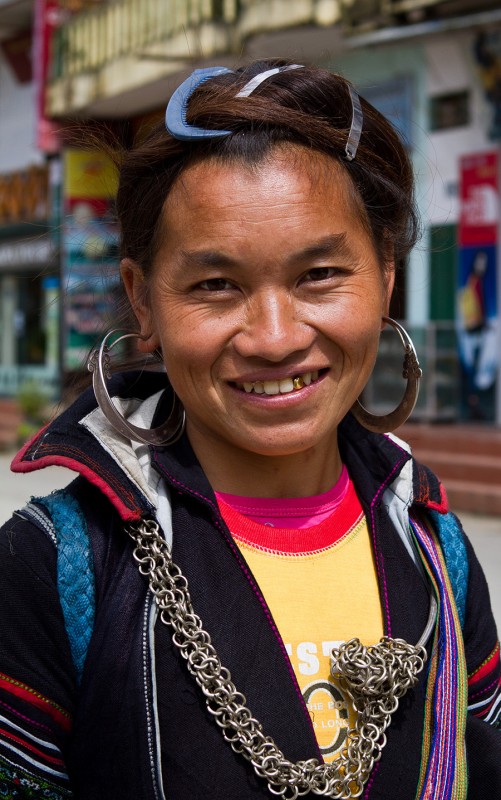 boarder in the high northern mountains in Vietnam. I actually

hand bags that the Hmong were actually very genuine people

nothing like the street sellers from Saigon. Yet again 10,000

dong got me a smile a photo and, this time, a phone number 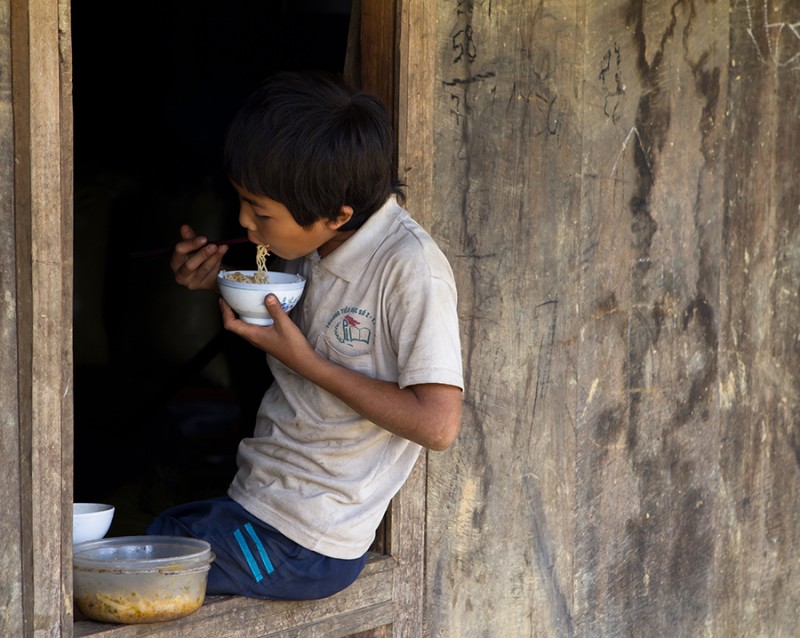 mountains outside Sapa we walked through a local village 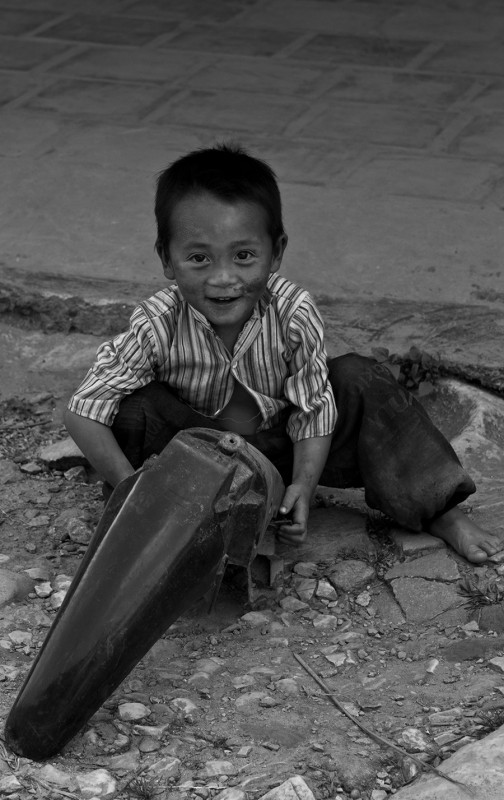 This was probably the happiest child I’d seen. Descending from

the mountains into yet another village that was more localized

on a small road, this young lad was playing outside a mechanics

shop playing with the rear mud guard of a bike. 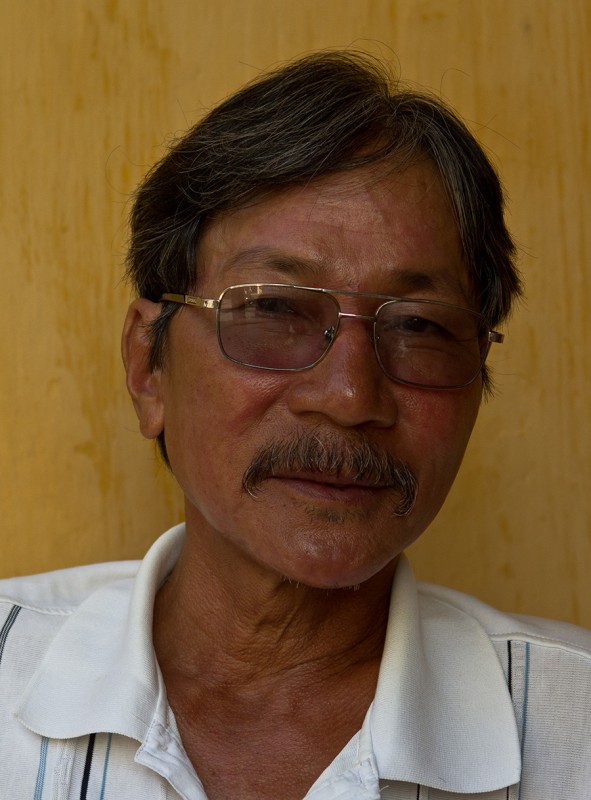 busy tailoring town where any garment you can imagine can

be tailor made and a very reasonable price. I had 2 custom made

jackets and 3 custom made shirts designed here costing me

made with water from the local Cham Well) . He sat at the table across from us and just before we left

I quickly asked if I could take this shot. 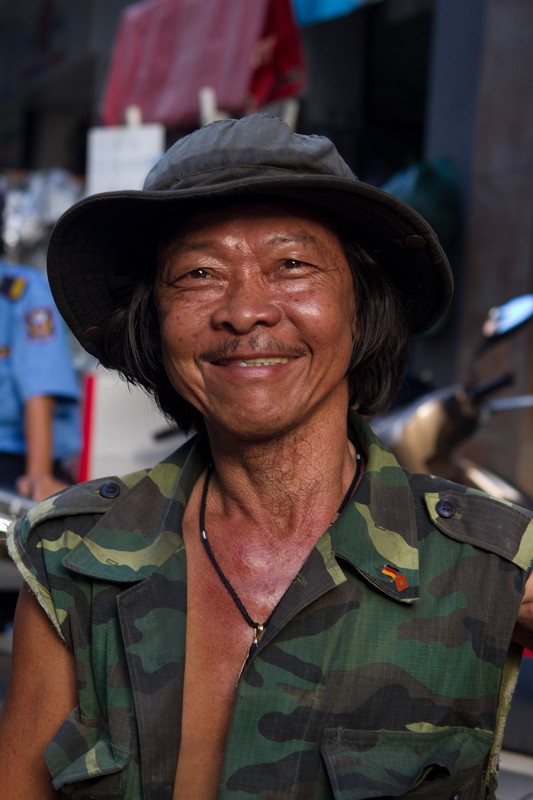 Taken on the main backpacker strip in Saigon this man used

one of the small chain coffee shops in Vietnam. He worked as a

mechanic. I took a few photos and he asked only for a beer at 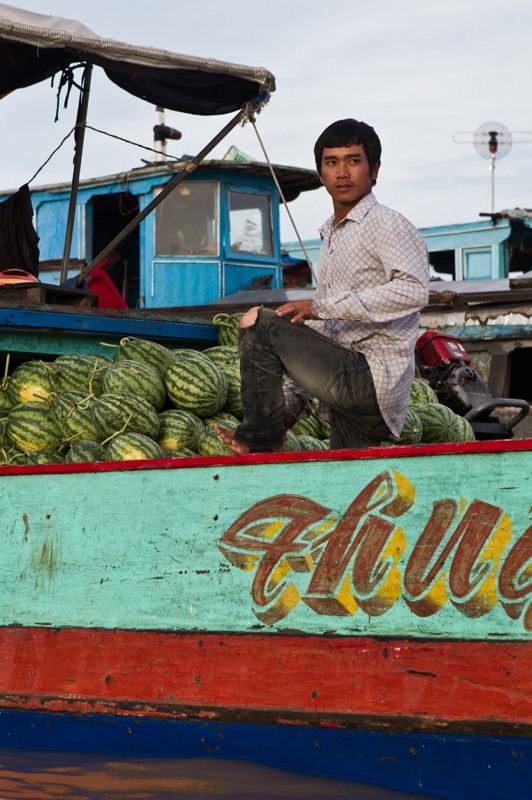 passed through this floating market. The man in this picture

actually walked into the shot and took this pose without realising

I was taking a photo 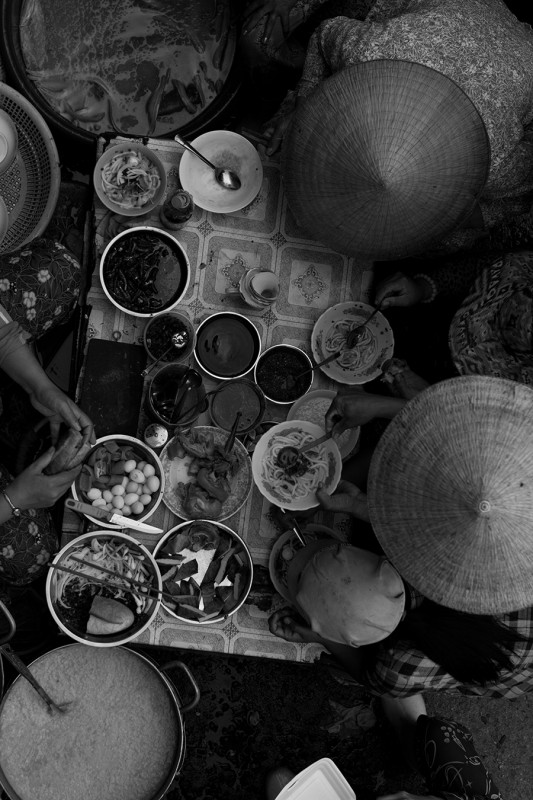 I had gotten chatting to a local Vietnamese photographer Long

take me to old Nha Trang. We met up at 6am and got a taxi to

the local fishing market. The area teemed with Vietnamese

business. We took a long ally which stank of fish, more so than

higher view point. Looking directly over the rail I noticed I was

above a group of dock workers sitting down for breakfast 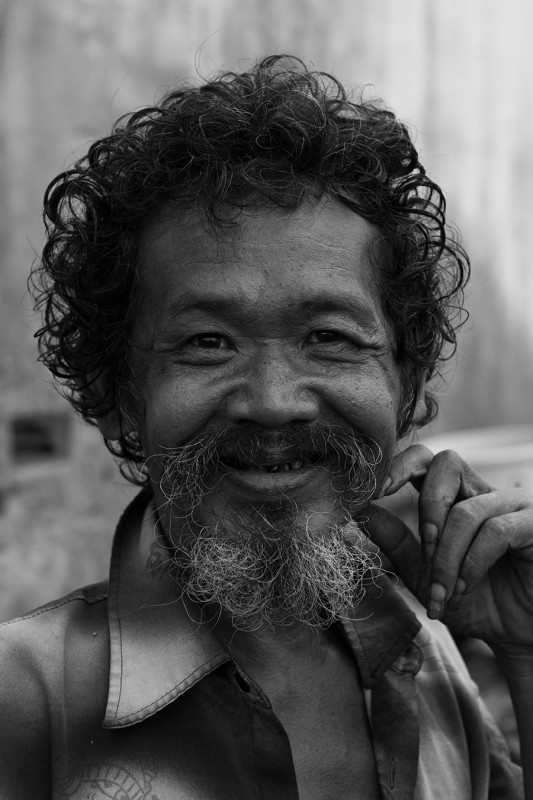 who grew up in this area and new the locals was vast advantage.

more willing to have their photo taken. This man was wondering 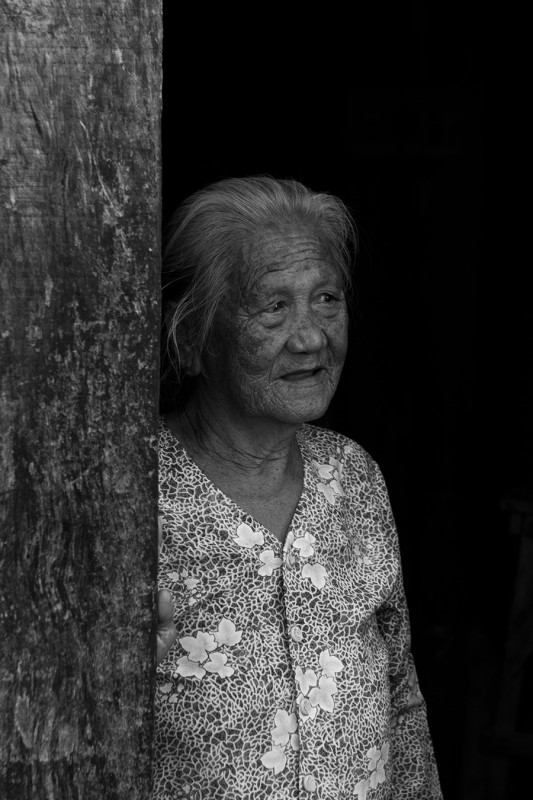 Following behind Long Thanh I noticed this old woman watching

him as he passed and took the opportunity 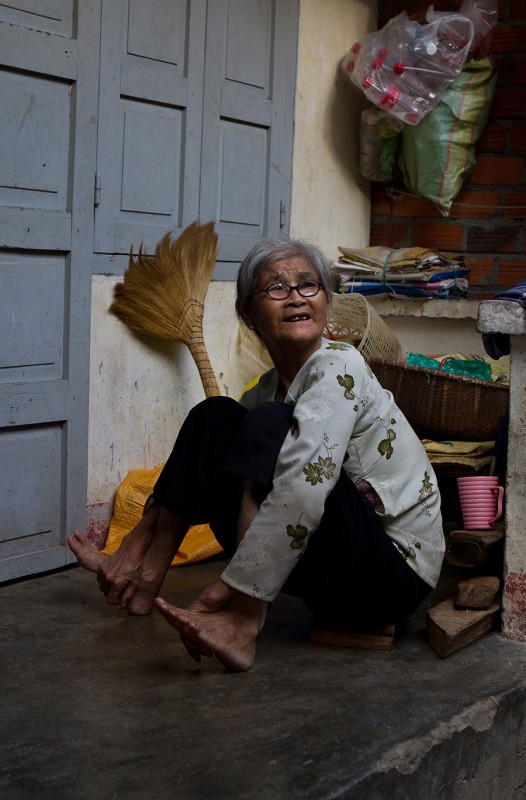 Walking down the Residential area of Old Nha Trang I caught

this lady sitting down watching the children play.

There are plans to turn these photographs into a book, keep up to date with this photographers work on his website – http://omcphotography.wordpress.com/