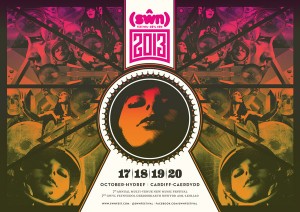 This weekend sees the return of Swn festival in Cardiff. We’re making the trip dwn and am very much looking forward to it. A chance to see Seazoo is hard to turn down, we’re keen to see Heal the Last Stands‘ Swn debut and we’re hoping to hear some new noise from Camera who are currently working on a new EP to be out before the end of the year . Other bands from the North taking the trip down include Golden Fable, Beard of Wolves, We/Are/Animal, Catfish and the Bottlemen and Cowbois Rhos Botwnnog.

Sŵn have just released the schedule for this years festival, find out the rest of the line up here. Wristbands are still available and priced as follows:


Tickets can be purchased via:


Sŵn have also announced Swn Radio is up and running from today through to next Sunday 20th. It will feature the best coverage, live sessions, broadcasts from gigs, documentaries, interviews, guest presenters and audience participation, with a variety of music legends, Sŵn acts and radio aficionados.

Sŵn Festival Radio will broadcast locally and globally via FM (87.7) and digital signals, allowing everyone to turn on, tune in and take part in the celebration. What’s more all the shows will be hosted afterwards on Mixcloud at mixcloud.com/swnradio.

Sŵn Festival wristband holders gain free priority access to all Sŵn Festival shows (with the exception of some ‘top-up’ shows), either across the whole festival from Thursday 17th – Sunday 20th October or on individual days. Entry to shows is not guaranteed and is subject to individual venue capacity. There will be a limited number of tickets on the door for each venue for that day priced between £5 – £10. Sŵn Festival is an 18+ event.

For all of the latest Sŵn Festival 2013 news see: