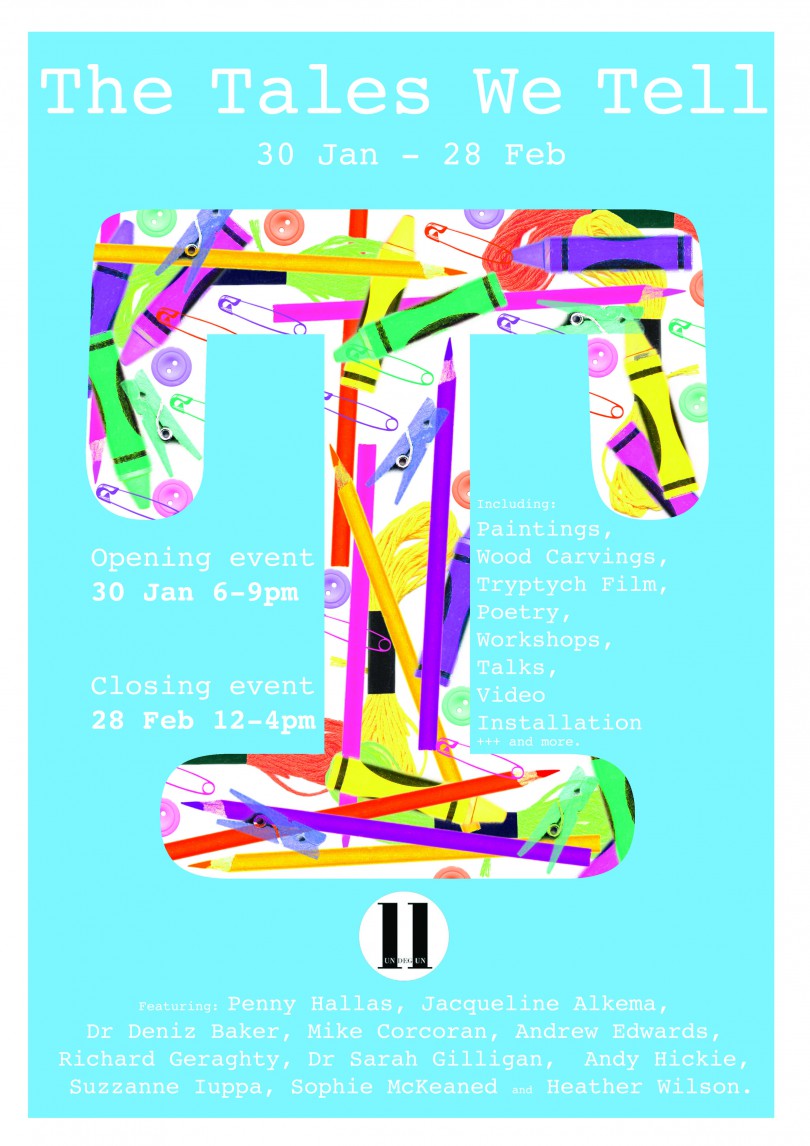 Stories surround us, from the mythic to the minute, the personal to the universal, the secret to the outspoken. The Tales We Tell revolves around the broad concept of tales told and re-told, altered, translated, re-interpreted, critiqued, and celebrated.


Involving art, video installation, workshops, poetry, guest talks, and multi-media, this is an assemblage of creativity based around the premise of storytelling in various artistic mediums; these form the basis of The Tales We Tell.


The month long event, curated by Stephen C. Kenyon Owen, is a mix of ‘in-situ’ art, video installations, workshops, music, and invited talks in collaboration with THIS Project.


The opening event, on the 30th of January at Undegun will feature poetry and music from Sophie McKeand and Andy Hickie respectively. This will be the first chance to see the artwork from a diverse mix of artists; Jacqueline Alkema; Richard Geraghty; Penny Hallas; Hilary Langston; Jonathan Powell; Amy Sterly.


Penny Hallas presents Orpheus, a collection of 40 drawings and Beyond Orpheus, a triptych film and sound installation with accompanying drawings. Together the body of work shown here on level 1 and level 2 gathers together various contributions to an open ended and ongoing project centred on the myth of Orpheus and Eurydice.


Richard Geraghty presents Stories on the Road, a photo series and short film about walking the ‘Camino de Santiago’, for 900km across northern Spain. Richard will provide a visual sense of what it’s like walking the Camino and also an insight into the people who walk it and why.


Jonathan Powell runs the Beep: Wales International Painting Prize and is co-founder of Portfolio Wales. For Tales We Tell he presents large format paintings that incorporate ideas of shelter and utopia.

Amy Sterly is exhibiting woodcuts which attempt to reposition landscapes and architectures, popular culture and everyday sights – entry points that highlight the mutability of interpretation and meaning.


Hilary Morgan Langston has created work in cloth that depicts the experience of loss, grief and acceptance for the relatives of an Alzheimer’s patient. The practise attempts to embody both the emotion of the actuality of loss, memory loss and the associated difficulties of retrieval through the metaphor of the journey and the map.


All work from these artists will be on display throughout the month and will feature in the opening & closing events.


Throughout February Undegun and Glyndwr will host activity that relates to Tales We Tell.


On Thursday 12th Feb at 1pm and 7.00pm Suzanne Iuppa will be presenting an image and spoken word performance. Suzanne Iuppa is a poet, community worker and filmmaker who lives and writes in North Wales. She has worked previously as a countryside ranger in the Clwydian Mountains.

6.30pm – Dr Sarah Gilligan
From Katniss Everdeen’s chunky hand-knitted sweater vest, to Effie Trinket’s outrageous couture dresses and designer shoes, fashion plays a key role in constructing and performing on-screen identities in the Hunger Games films. In this talk, Sarah Gilligan discusses the ways in which the seductive spectacle of high-end designer fashion is used both on and off-screen to lure audiences into desiring and consuming a range of branded goods.

7.30pm – Mike Corcoran & Jake Campbell
This presentation looks to explore these questions through science, philosophy, poetry, and the visual arts, in an ekphrastic collaboration bringing together poet Jake Campbell, and visual artist Mike Corcoran. The collaboration was born out a shared interest in the stories with which we are raised, the environments which provide the settings, and how these stories and settings form an inextricable part of the people we become. They believe the individual, their surroundings and the stories associated with these surroundings are interconnected: one cannot be fully understood, without reference to the other two


Dr Deniz Baker – David Jones, Intertextuality as Redemption in ‘In Parenthesis’ (1937).
Deniz Baker is from Yorkshire and completed her PhD at York University. She has worked at Glyndwr University for over 20 years and although her academic roots are in literary modernism she has developed and taught courses in film, visual culture, gender, and writing from many different times and places.

Andrew Edwards – Intertextuality in the work of Alan Moore


Andrew explores how, and to what effect, Moore engages with pre-existing texts (including comics and other media e.g. novels) by other writers, artists and creators in the creation of his own graphic novel and comic book work.

The 1 hour seminar will include the UK premiere of ‘Split Second’ and a behind the scenes look into the film’s production, from the initial conception on the back of a beer mat to the current screening at an international arts festival.