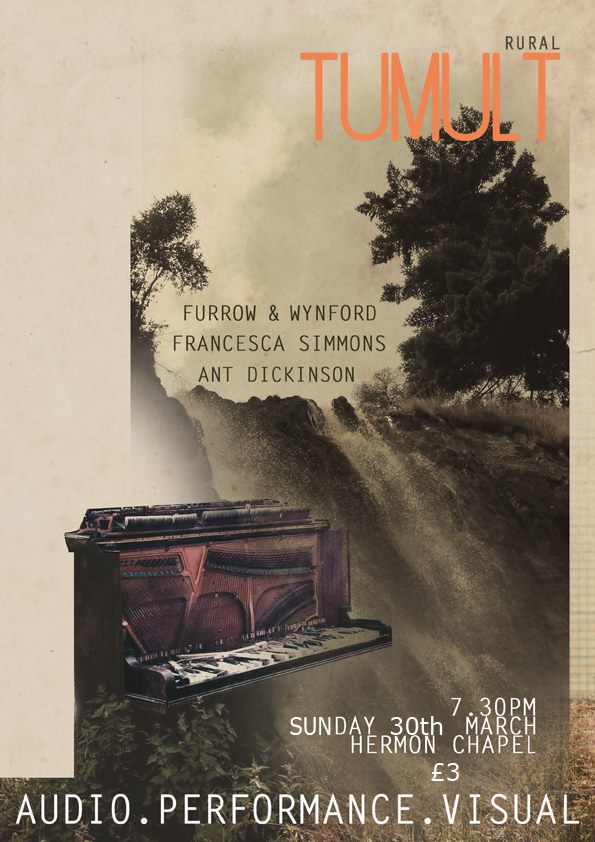 TUMULT is an exhibition of audio/visual works that have used the natural environment as an influence as well as to directly create sounds and manipulate instruments, the resulting artworks are being exhibited as performance pieces at the Hermon Chapel, Oswestry on March 30th from 7.30 p.m.

The fall is a collaborative project between Furrow and Wynford in which field recordings were taken from LLanrheaedr Waterfall using various equipment such as contact mics and tape recorders, capturing sounds from the waterfall and surrounding environment as well as manipulated instruments (a submerged snare drum for example). These recordings were used as the starting point for a series of improvised compositions. The recorded improvisations are being released on cassette (via ASDFG records) with dyed photogram sleeves and prints of images from Llanrheaedr. The original field recordings are being used to perform new improvisations at the Hermon Chapel.

Nothing New and Piano Duet 1 are electroacoustic/audiovisual compositions that explore concepts of time, memory and death through unconventional piano performance.

Nothing New (Film) documents musical interactions with a piano in an exposed North Wales field over an 18 month period.   All material was improvised responding to the pianos condition and edited to form a continuous composition.   Throughout the piece the piano decomposes and withers. The piano is still in the field.

Piano Duet 1 (Live improvisation and triggered video footage) is a duet between past and present.  Video footage of a piano being destroyed with tools in the past is synced to a rescued piano being played in the present.

Tickets are £3 and can be purchased on the night if you can’t get one from Outwhere Records beforehand. There’s a facebook event for this here