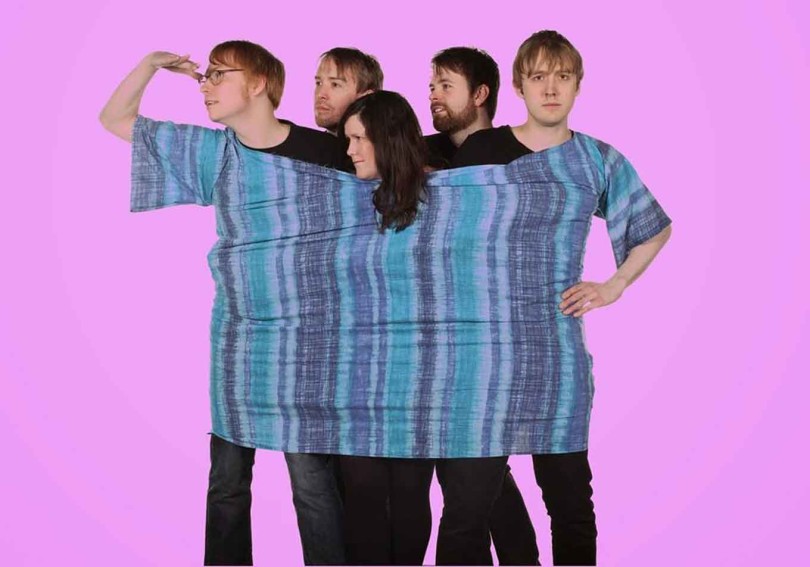 Seazoo are a Welsh bedroom-pop group that began in April 2013 with the release of their debut EP ‘Ken’. Ben Trow, Llinos Griffiths, Mike Smith, Steffan Owens and Dan West form the band who have been treating our ears to a number of blithesome tunes, including the self-released ‘Dog Hotel’ single from 2013 and ‘Panda Pains’ released earlier this year on Label Fandango.

THIS Project wanted to find out a little bit more about the band before they play a launch show for  ‘Car Deborah’, their latest EP, at Undegun on the 5th June, with support from Castles and Heavy Petting Zoo.

Before the launch, Seazoo’s Ben Trow and Steffan Owens will be making a special appearance on Calon Fm on Wednesday 3rd June from 1pm to talk about the event, but before that THIS Project wanted to ask about the music and how they have found the past 12 months and what else they will be up to in the near future.

Thank you for agreeing to answering a couple of questions, it is always great to find out more about the bands that we have performing with us at Undegun. So over the past 12 months, what have been your highlights?

Been really busy over the past 12 months. Loved playing the summer festivals, highlights include Greenman, Festival No.6, Howlin’ Fling on Eigg, Focus Wales and SWN.

We were honoured to be asked to play a BBC session at Maida Vale in London, in the famous Studio 3! Also, we’ve played a packed out show in London for Huw Stephens which was amazing!

We’ve also recorded the EP, released a single from it, and have been fortunate to have been supported by BBC 6 Music, radio 1 and the BBC in Wales. Again, honoured to be asked to do a live session for Marc Riley on BBC 6 Music.

Was also great to be a part of the BBC/Arts Council in Wales scheme – Horizons. Got to meet lots of new people and have our music heard by lots of different audiences world wide.

A definite highlight though, was our last launch show at Undegun! Was a great atmosphere up in the small room. Love Wrexham!

With your latest release ‘Car Deborah’ we have already had the pleasure of listening to its first release ‘Martyn and Jayne’. With this song in particular there seems to be a layer of distortion over the guitars, is this a particular direction Seazoo are taking with their latest album? Or something the band are currently playing around with?

I guess the more distorted sound is a direct result of playing live as a band. Seazoo was set-up as a home recording project, and we never planned on playing live. We then formed the live band after being asked to play the Llangollen Fringe Festival, and found the fun in making the songs more distorted and loose. Live though, feedback really helps in covering mistakes as we don’t get chance to practice a lot! Our more recent recordings now reflect the live show a bit more.

For the past week you have all been back in the studio recording. How have you found it? And what else has the band been up to?

Yep. We’ve been down near Hay on Wye, recording the drums for the debut album. Very exciting! We record everything at home, and usually do the louder things when the neighbours are out. However, it’s just not possible to get through 15 drum tracks like this. So, we went to a residential studio, and took all our own gear down. 3 days, 15 drums tracks. And also got chance to record some Fender Rhodes too.

Next, we’ll finish it all off at home!

When the album is released what will the band be up to next?

Hopefully we can get the album out this year. We have a mountain of songs to work though, so guess we’ll just crack on. Hopefully be able to start recording the second album before the end of the year too, so there’s not a huge gap between the next batch of releases.

In your Facebook bio, I had noticed that it mentions another member that was briefly in the band for a short time, when the band only consisted of two humans and a teddy bear from a charity shop. What happened to the Teddy bear? Does the teddy bear have a solo career and will there ever been a reunion?

The bear is still about. He’s in the upstairs bedroom right now. Gathering dust. When we started playing with actual humans, we realised how rubbish he really was. He’s never leaving that room hahahahahahaHAHAHAHAHA.

For more information about their upcoming EP launch at Undegun please click here.